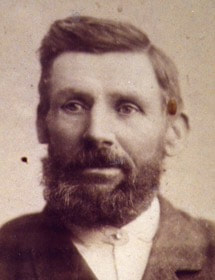 John McGeorge Barclay (date unknown)
John McGeorge Barclay was born 14 June 1840 in Much Wenlock, Shropshire, England. At the time of his birth his Scottish-born father Walter was a draper. John’s mother, Harriet, died when he was one year old. Walter married Elizabeth Clifton. They had three daughters, Elizabeth, Sophia and Fanny and a son Isaac in 1851. Shortly after Isaac’s birth, the family decided to emigrate to Australia.

They family of six embarked on their journey in Plymouth, where they boarded the “City of Manchester” on 9 March 1851 and arrived in Geelong on 16 July 1851. The Barclay’s settled in Ashby in West Geelong, where 2 more children were born into the family, Walter in 1853 (who died the same year) and Walter Wallace Barclay was born in 1855 in Ashby.
​
Walter applied for and was granted a licence to sell liquor and found himself the publican of the White Hart Hotel, on Melbourne Road in Ballarat. He was also briefly a publican at the Carriers Arms Hotel in the township of Clarendon. It seems Walter may have extended himself a little too far, as he was looking to sell the hotels by 1857 and had appearances at the insolvency courts as well.

Print of the White Hart Hotel owned by John McGeorge Barclay's father Walter.
​In 1865, after selling all his assets in the hotels, Walter and John McGeorge Barclay leased crown land under the Land Act 1862, the land was in Ballan – Parish of Kerrit Bareet, County of Grant.  Walter purchased 30 acres being lot 13 and a further 16 acres being lot 14.  John purchased approximately 20 acres adjacent to his father’s property, and a further 24 acres nearby.The conditions of leasing crown land meant that owners were required to improve the land and/or farm it.  Walter planted crops of barley, rye, oats and wheat as well as hemp and tobacco on his allotment. John Barclay named his allotment “Wenlock Farm” in a tribute to the town in which he was born, and the fertile ground yielded oats, peas, hay, red and pink eyed potatoes, John also grew turnips to feed his dairy stock. 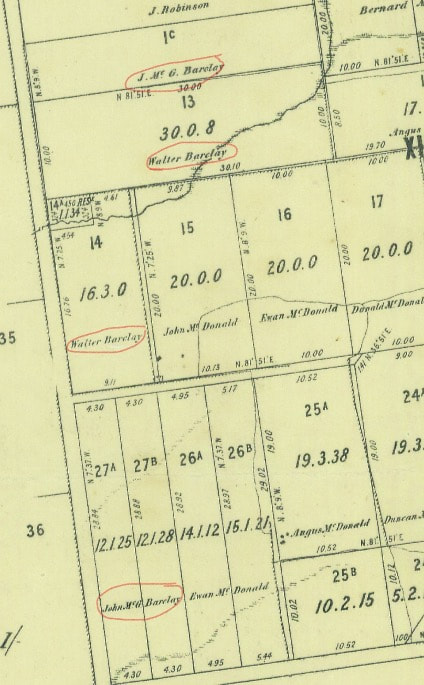 Detail of a map of the Parish of Kerrit Bareet, County of Grant (current day Mount Egerton) where Walter Barclay and his son John settled.
John was faring well as a young immigrant in this new country, and his luck continued when he met and married Emily Betsy Wade on the 9th of December 1867.  The pair married at a private residence in Bungaree – possibly Emily’s parents’ residence – and the witnesses on the day were Sophie Barclay (John’s half-sister) and Daniel Wade (Emily’s brother).
Emily Betsy Barclay (Wade) (1848-1909) 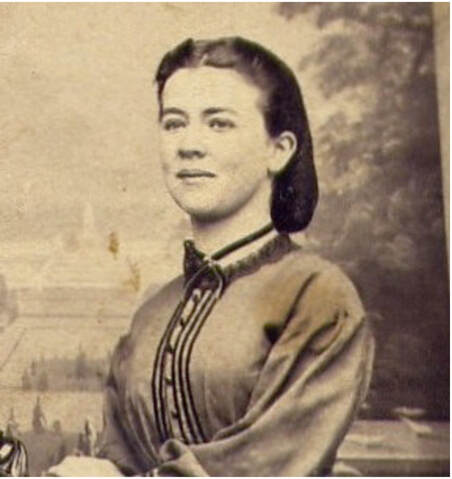 Emily Barclay (date unknown)
Emily Betsy Wade was the 5th of the eight children born to Henry and Jane Wade (nee Parke), on the 2nd of April 1848 in Mayland, Essex, England.  When Emily was just over a year old, the Wade family emigrated to Australia, sailing from London aboard the barque “Navarino”, arriving in South Australia on the 5th of November 1849.  In 1854, the family were living in King Street in Melbourne and Henry was listed as a labourer.  By 1867 – the year that Emily married John Barclay – the family was living in Bungaree, where Henry acquired 115 acres in the area.
John and Emily set up their home at Wenlock Farm, and from 1868 – 1890, Emily bore 13 children.  Their twelfth child, Leslie Grant Barclay, sadly died at just under three months of age in 1888 and became the first of the Barclay family to be buried in the Mount Egerton Cemetery.  In April of 1893, sadly John and Emily were burying another child, the eleventh born child Austin James Barclay was buried with his brother after succumbing to croup caused by diphtheria. He was just 6 years of age. 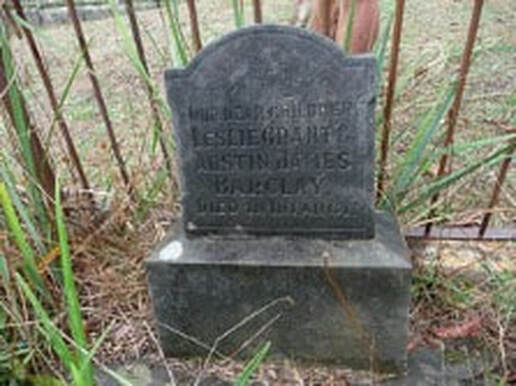 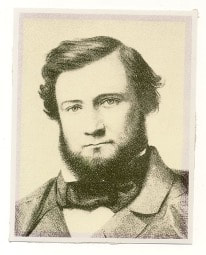 ohn and his family were devoted to the Wesleyan Church and Sunday School, spending a great deal of his spare time helping the pastors of the church as well as its congregation,  John and Emily often opened up their home at Wenlock Farm to host community meetings, and by all accounts, they were the perfect hosts.  From school board meetings, to the Egerton Wesleyan Circuit meetings, Wenlock Farm was a busy hub, and no more so than each New Years Day, when the Barclay’s hosted the annual Wesleyan Church and Sunday School picnic on the paddocks of the estate.\
​
John was often called upon to host other events and was often the speaker – or MC of sorts – for many community functions and gatherings.  He would speak truthfully and eloquently on behalf of the town at farewell parties to residents, public meetings and the like.  John chaired a political rally held in Egerton when Peter Lalor (pictured right) was running for the seat of Grant.

In 1881, John was the chair of the Egerton Relief Fund and was the host of many concerts and fund raisers for the fund.  In his opening speech at a concert held at the Mechanics Institute in August of 1881, he praised all of the great work being done by the society through affording relief to all who were in necessity.

In around 1905, John was appointed a Justice of the Peace by the Chief Justice.  Among his powers in this capacity was the ability to give consent, subject to the provisions of the Act 1890, to the marriage of minors within the Egerton and Gordon district.

1909 was sadly the year the family lost their matriarch Emily.  Emily died at Wenlock Farm of bronchitis and exhaustion on the 29th of August 1909, aged 62, her death was certified by Dr Alexander Corry.  In the newspaper obituary, she was described as very much liked and respected in Gordon and Egerton. Emily’s funeral took place on the 31st of August 1909, leaving Wenlock Farm at 2pm for the Egerton cemetery.

While John would have been shattered by the loss of his life partner and mother of his children, he thankfully had his eldest daughter Harriet still living at Wenlock.  Harriet – who never married – was devoted to her father and attempted to ease some of his despair at the loss of Emily.  John also had Nettie and son Egerton still living at home and helping with the farm duties.  Just two years after Emily’s death, in 1911, Egerton married Flora McKenzie Penman and the couple stayed working the farm for a few years while raising a young family.

In 1917, John was 77 years of age and continued to reside at Wenlock Farm, he was still an active member of the community and often drove his buggy into Gordon and Egerton.  On one day in March of 1917, he was thrown from his buggy when a bolt came out of the shaft causing the horse to scare and as a result the buggy upturned, spilling John and daughter Harriet from it.  Dr Corry attended to the pair and while Harriet suffered minor injuries, John hadn’t escaped so lightly, with 2 broken ribs as well as being quite shaken by the incident.

John was suffering ill health, however he had been ably and lovingly cared for by his daughter Harriet, who was never far from her father’s side, even though she too was ailing and had to travel to Melbourne on a few occasions for operations.  It would have been heartbreaking then for John, when, on the 28th of December 1921, Harriet died of sarcoma (bone cancer) and heart failure.  Condolences were sent from far and wide, and the locals knew that this death would be especially difficult for the aging John to deal with.  Harriet became the fourth member of the Barclay family to be buried at the Mount Egerton Cemetery on the 30th of December 1921.  The undertaker was Hugh Evans and son, and the Methodist reverend Alexander MacQueen performed the ceremony.  Harriet was 51 years of age. 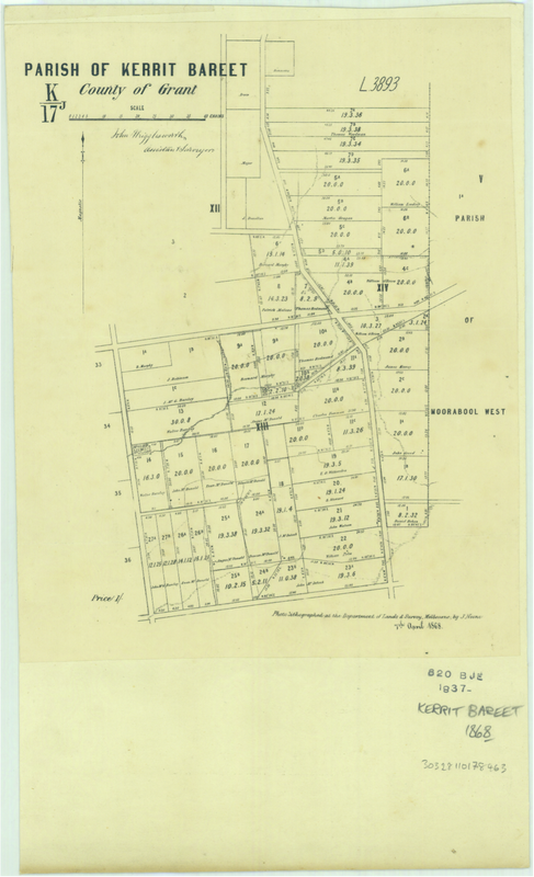 Map of the Parish of Kerrit Bareet, Country of Grant (current day Mount Egerton/Gordon). Wenlock Farm was situated in the south-west corner of the parish.
John turned 82 in June of 1922 and there was a celebration of this milestone celebrated at Wenlock Farm.  The Ballarat Star reported the event on Wednesday the 7th of June 1922 – “Birthday celebration – “father” Barclay, JP, of Gordon, celebrated his 82nd birthday anniversary on Thursday last, when a few intimate friends visited his home to wish him many happy returns of the day.  The earlier part of the afternoon was spent in music, secular and sacred.  Later the party sat down to an elaborate afternoon tea, after which the chairman (Missioner MacQueen) conveyed congratulations to Mr Barclay, his remarks being supported by an old friend of Mr Barclay (Mr George Hopwood), reminiscences of ‘other days’ being recalled with pleasure; also by his daughter-in-law, Mrs Herbert Barclay.  Mr Truswell, stationmaster at Gordon spoke in happy terms, the speeches being briefly acknowledged by Mr Barclay, who has been laid aside for the past 3 years”.  The endearing term “Father Barclay” at the beginning of this article, gives a hint as to the esteem in which John was held by the people in his community, as does the variety of people in attendance at his birthday celebrations.

John continued to live at Wenlock Farm and daughter Nettie and her family also moved back to Gordon to take care of him.  John died on the 22nd of January 1928 of senile decay, cardiac failure and exhaustion.  He was buried at the Mount Egerton Cemetery on the 24th of January 1928 at the age of 87.
​
In November 1928, The Wenlock estate was sold – with daughter Nettie and her husband William Sterritt purchasing the homestead block and a Mr D Sullivan purchasing 40 acres of the adjoining land.  So, happily, the farm, which was much loved by John and Emily, remained in the family.