Mount Egerton Cemetery
A BRIEF HISTORY
:Mt. Egerton Cemetery (or Egerton Public Cemetery as it was formally known) is an important place historically and culturally for the Mt. Egerton and district community. The cemetery is the burial place of a number of pioneering families and individuals who settled in the area in the nineteenth century and continues to this day to be a place of remembrance.

Gold was discovered at Egerton in 1854 and a thriving mining community was soon established. Initially no cemetery was gazetted for the town but an area at the bottom of the south hill was used as a burial ground.  The first burial is thought to have taken place in 1855.  Sadly it was the burial of a baby, a not uncommon event in those days due to the harsh conditions settler families experienced before health services were a part of everyday life. The baby's resting place was marked by a thick wooden slab with deeply cut letters engraved. This monument become the focal point for residents of the district who buried their dead around the same spot. Many people erected wooden fences, which over the years became dilapidated and eventually disintegrated.

In October 1871 after the burial of one of Mr Learmonth’s men, attended by more than 200 miners, a request was made for an official burial ground.  The Bacchus Marsh Express’ correspondent wrote:

It has, for a considerable time passed, being considered by the people of Egerton that, on account of the great number of deaths from various causes that have taken place within the last few years, and the prospect of its being a settled district, Egerton could no longer do without a cemetery, and everyone was eager that such should be obtained, accordingly one or two moving spirits took the matter in hand , and had much correspondence with the government on the subject. At least five acres of land have been granted for the purpose, and a sum of money also for fencing purposes a public meeting was called…and the meeting resolved that each denomination should be written to separately to nominate two trustees to represent them and that such nominees meet at Harris’s Commercial Hotel, Egerton, on Tuesday, the 18th of June at 8 o'clock pm.’

The rules and regulations for the Egerton Public Cemetery were gazetted on 1 May 1878. 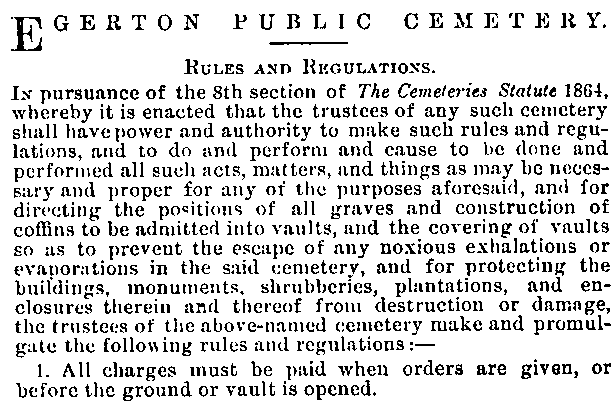 An extract from the Egerton Public Cemetery Rules and Regulations, 1 May 1878.
​A local record of burials was not undertaken until 1879 when the cemetery was fenced, drained, cleared of stumps, scrub and unsightly timber and laid out into sections so that dead of each denomination could be buried in their own portion and future graves laid out with some degree of uniformity. A sexton was also appointed. 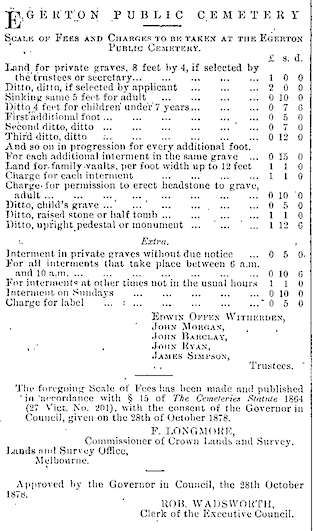