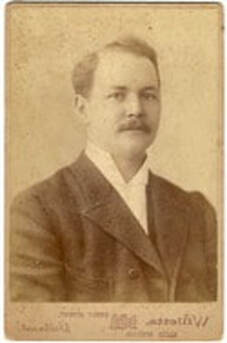 In 1885, Alexander graduated as a Medical Doctor(MD) and also with a Masters in Obstetrics (MAO) from the University of Ireland in Dublin.  In 1886 he was a registered medical doctor in Ireland.  He practised briefly in Glamorgan, Wales, before moving to Australia in about 1888. When he arrived in Australia, Alexander lived in Mount Egerton.
Matron Isabel Corry (1885-1924) 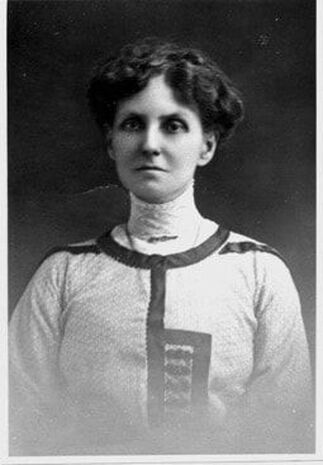 Isabel Corry (1885-1924)
​Isabel Corry was born on the 23 December 1855 in County Tyrone, Northern Ireland to Samuel and Eliza (Kelly) Corry.  She was the fifth child born of eleven children in total to the couple. Isabel immigrated to Australia in the late 1880’s and took up a nursing position early in 1892. It is assumed that Isabel may have had some prior formal nursing training as it seems she moved through the ranks quite quickly after arriving in Victoria.
​
The first nursing position Isabel had in Australia was at the Wangaratta Hospital – a regional city in north-east Victoria at the junction of the Ovens and King Rivers.  By 1896, Isabel was the Matron at the hospital and was living in Green Street Wangaratta.  The address of the hospital was, and currently still is, 35-47 Green Street, so Isabel was living quite close, and probably in the nurse’s quarters at the hospital.  In the same year, it was reported that the 40-year-old Matron had been recovering for some weeks from a severe illness which had forced her to obtain leave from her duty.  She remained under the care of her brother - Dr Alexander Corry of Mount Egerton – during this time. (Ovens and Murray Advertiser 24.4.1896). 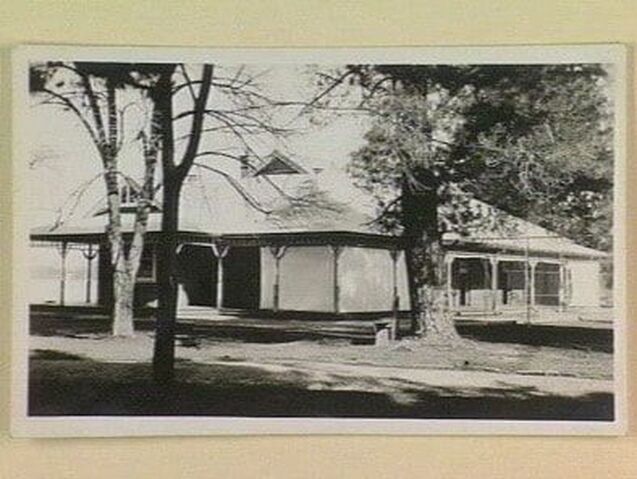 Nurses quarters at Wangaratta circa 1914 (State Library of Victoria Image number a08927).
In June of 1901, the secretary of the Wangaratta Hospital discharged the hospital cook on the advice of Matron Corry – however, this upset the rest of the hospital committee, who deemed that the matron must be a difficult person to work for, and the president of the committee re-instated the cook’s position.  Another incident reported in the same newspaper on 29 March 1902, outlined a complaint reported by Matron Corry which had been investigated by the committee.  The charge of insubordination was made by the Matron against the laundress Miss Ada Fisher.  The committee, after hearing all the evidence, concluded that the charge had not been sustained, but that there was evidence of friction between the pair.  The committee therefore ruled that “In the interests of the hospital it is absolutely essential that the same should cease and a better feeling between the parties prevail, otherwise the committee will be recommended to take drastic measures to ensure same” (Ovens and Murray Advertiser 29.3.1902).
​
Early in 1903, Isabel became the proprietor of St Mary’s Private Hospital in Wangaratta.  She continued to also work in her role as Matron of the public hospital for some time. In October 1904 there were again unhappy staff at the Hospital.  A special meeting of the Hospital committee was held on 26 October, where three nurses – Duncan, Payne and Finn – detailed the arbitrary and unbearable conduct of the Matron Corry towards the staff.  The inquiry went from 7.30pm until 2.30am the next morning.  “The charges proved that there was great unpleasantness existing between the staff and Miss Corry owing to what they described as her nasty temper, but which Miss Corry contended was simply a system of discipline” (Ovens and Murray Advertiser 29.10.1904).

It seems that the unpleasantness was taking a toll on the Matron, and she took leave of her duties for a while and then finally resigned her position as Matron at Wangaratta Hospital in July 1905, after 13 and a half years serving the community.  At a farewell gathering, the townspeople presented her with a purse of sovereigns.  She thanked the committee for the kindness she received and wished the institution every prosperity.  By all accounts, she was well respected and popular with all classes of society.
During the next few years, Isabel worked at the St Mary’s Private Hospital.  From 1913 to 1917 she moved around and worked at quite a few hospitals in Victoria and New South Wales, never quite settling at any one for too long.  Isabel held a Matron position at the Casino Friendly Societies Hospital, Nhill Hospital, Portland Hospital, Jerilderie Hospital, Goulburn District Hospital, Molong Hospital and Cooma Hospital.

By the middle of 1917, at the age of 62, Isabel had retired from her nursing career, and in 1922 she was living with her sister, Mary, at 28 Millswyn Street in South Yarra.  In 1924, she was living at 80 Commercial Road Prahran – where she died on 18 December 1924.
Isabel, having never married, nor had any children, left all of her estate to Mary – who also had never married.  Isabel Corry owned two properties at the time of her death (she co-owned with Mary) – 57 Adam Street South Yarra – which was an old brick dwelling of ten rooms valued at 2500 pounds, and 80 Commercial Road Prahran, valued at 1500 pounds.
​
Isabel Corry was buried at the Mount Egerton Cemetery on 19 December 1924, in the same plot as her brothers William and Alexander and her sisters Emily and Mary. 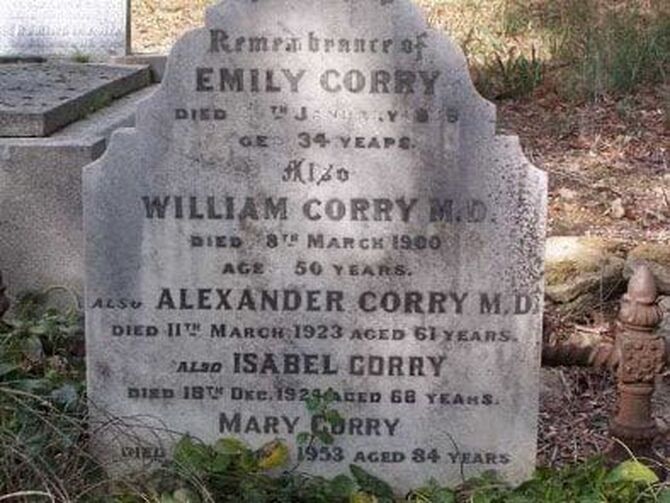 Corry Family grave, Mount Egerton Cemetery.
Henry Overend Corry the eleventh and last child of the family was born on the 13th of January 1875 in County Tyrone.  He travelled from London to Western Australia aboard the ship “Victoria” with his sister Mary, arriving in Fremantle in October 1902.  On the 28th of June 1916, at the age of 41, Henry married Agnes Amelia Gervasi, at St Andrew’s church in Coolgardie, Western Australia.  The couple resided in Kalgoorlie and Henry was a tramways worker until September 1943, when he retired as he had been advised that, owing to his wife’s poor health, he needed to move to the coast.  The couple had 2 daughters – Elizabeth Winifred in 1918, and Mary Veronica in 1922.  Henry died aged 84 on the 21st of June 1959 in Perth, Western Australia.  He is buried at the Karrakatta Cemetery in Perth.