Mount Egerton Cemetery
BAWDEN FAMILY
Six members of the Bawden Family are buried in the Mount Egerton Cemetery.
Edward Bawden​
Edward Bawden was born 2 April 1841 in Cornwall, England and christened at St Paul’s Ludgvan. His father, Thomas, was 40 years old at the time of his birth as was his mother, Elizabeth (nee Madden). Edward was the youngest of six children born to Thomas and Elizabeth. In 1851 the family was listed on the census as living at 53 Tolvn Rd in Gulval in Cornwall. Thomas was described as an agricultural labourer.

Edward arrived in Liverpool on 20 July 1858, aged 17, in preparation for his emigration to the colony of Victoria. He found himself amidst the crowds of passengers, luggage, passengers’ friends and families all jumbled together on the deck of the tender – ready to transport them all to the clipper Red Jacket, lying at anchor off the Tranmere shore. Edward would have lined up with the 400 other passengers to stand before the Government Emigration Officer, who examined each passenger and asked as to their state of health, before checking their tickets and sending them on their way. 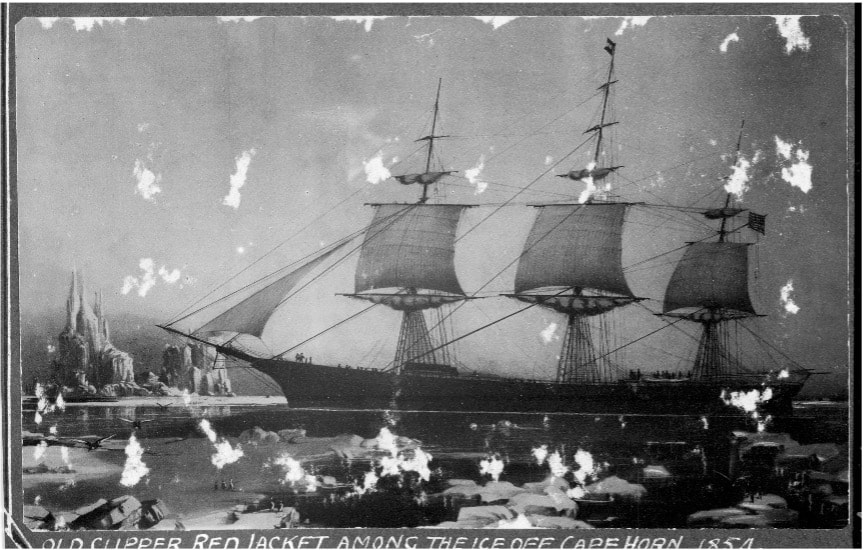 Clipper Red Jacket. (Brodie Collection, La Trobe Picture Collection, State Library of Victoria.)
On the ship's passenger list, Edward describes his calling as a miner – and indeed gold fever had well and truly gripped Victoria by this stage, hence the large number of passengers on board.  As the ship was approaching Australia, there were lanterns hung in the rigging and dancing on deck. Edward arrived in Melbourne in October 1858. After disembarkation he made his way to the goldfields, possibly beginning at Ballarat with his brother who had emigrated to Australia at around the same time. In 1862, at the age of 21, Edward married Phillipa Lean (or Lane), who was also a native of Cornwall in England.

In 1870, Edward was working for the Homeward Bound Quartz Mining Company in Gordon with his brother James. In 1872 the family were living in Bungaree when a son, Edward was born, sadly dying the following year. By the time the last child in the family was born – Phillipa in 1884 – the family was living in Mount Egerton. By 1886 he had become the president of the Egerton and Gordon branch of the AMA (the Amalgamated Miners Association). The AMA fought for improved conditions for miners – especially after independent miners were increasingly taken over by large companies and the autonomous miners become employees of the mining companies.

Phillipa Lean (Lane)
Phillipa Lean – whose family name seemed to change to Lane – was born in Kea, Cornwall in 1843, to John and Elizabeth (nee Trudgeon) Lean. She was the sixth child of the ten children in the family.  On the 15th of December 1854, when Phillipa was 12 years old, the family embarked on the ship the Lady MacDonald, bound for Port Adelaide, South Australia. The family lived in South Australia until about 1857, when they embarked on another journey, this time to the Victorian goldfields. They probably travelled on foot, with horse and cart, with all their belongings – as many other Cornish miners and families did at this time.

Phillipa married Edward Bawden when she was 19 and the couple settled in Ballarat where they started their family. Phillipa gave birth to one child a year from 1863 to 1866, beginning with Elizabeth, then John, Harriet, and Mary Ann. James was then born in 1868 before the family moved to Gordon where Maria Louisa was born in 1869, followed by Edith in 1870.

After the death of Edward, Phillipa was living by herself as all the children were gone. She moved to Ballarat and was living near her daughter Harriet and her family.  Just before her death, she moved to Collingwood where she died on 22 August 1905 at the age of 63. She was buried with her husband Edward at the Mount Egerton Cemetery on 24 August 1905. 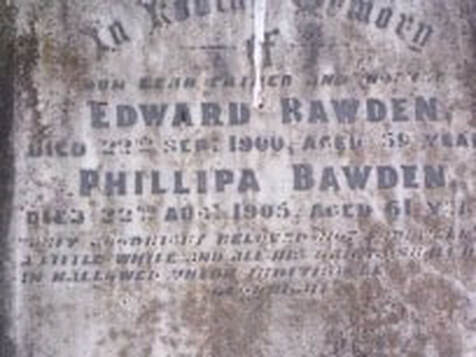 Edward and Phillipa Bawden's gravestone at the Mount Egerton Cemetery.
​John Bawden
In 1887, John married Ruth Dear Trotter – a local who was born in Steiglitz.  In 1889, Ruth gave birth to a stillborn child and, tragically, died a few weeks later due to puerperal insanity. Ruth was 24 years old when she died on 15 January 1889. The funeral was held at the Mount Egerton Cemetery on 17 January 1889. The Wesleyan minister Reverend Robert Brown performed the ceremony. The people of Egerton mourned, especially for John, who was held in high esteem as a respected miner and president of the local Independent Order of Rechabites Friendly Society.

By 1890, John had re-married - to Agnes Moffat Russell, and the couple had five children – William Stanley born in 1888 (the exact circumstances of William’s birth and parentage are unknown), Edward Madren born in 1892, John Bawden born in 1895 (sadly living for only 3 days), Jessie May born in 1896 and James Earnest born in 1900.

By 1892, the family moved from Egerton to t Footscray. Subsequently, John took up some land at Pascoe Vale and had a piggery. However, in 1907 the council had decided – as the area was beginning to become more urbanised – that they would no longer be issuing licenses for piggeries. In 1909 the public works committee refused to renew John’s license despite his many protestations that it was his livelihood. In 1915, John and his eldest son William were listed as farmers of Prospect Street in West Coburg, the land being on the corner of Kent St (now Kent Road) and Derby Street, Coburg.

​In November 1914 John and Agnes’ son Edward enlisted for service in the Australian Imperial Forces. He was 22 years old and a fitter and turner by trade.  Edward was in the 8th Light Horse Regiment and saw action in Gallipoli. Edward’s regiment was a part of the Battle of Bir el Abdi during the Palestine and Sinai campaign. Edward was killed in action on 9 August 1916. He was buried at the Kantara War Memorial in Egypt. 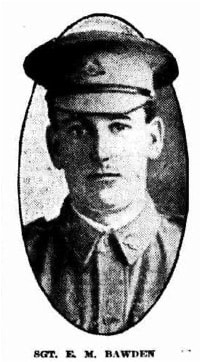 Edward Bawden's grandson Edward who was killed during the Great War in Palestine (Image: www.vwma.org.au)
John Bawden died at the age of 53 on 2 April 1917 after many years of suffering severely with asthma. His remains were brought by train to Egerton on 4 April 1917 to his brother James’ residence. The funeral party travelled from James’ house to cemetery for the graveside service and interment.

After John’s death, Agnes was living with her son William Stanley and his family in Kent Road, Coburg, before moving in about 1930 to Wahgunyah on the Murray River.  For the last few years of her life she was living with her other son James Earnest in Corowa NSW. Agnes died 15 August 1949 and she was buried in the Fawkner cemetery.
James and Jane Bawden 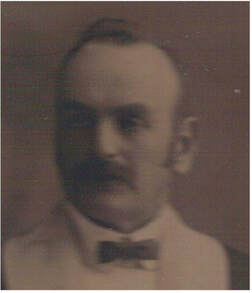 James Bawden, date unknown. (Picture credit: Rob Congdon)
James Bawden (second child of Edward and Phillipa Bawden) married Ballarat-born Jane Hodge on 8 July 1891. The ceremony was held in Ballarat and presided over by Reverend J B Johnson. Jane’s father Daniel was a blacksmith in the Black Horse Mine at Egerton. At the time he was married, James was operating a successful butcher’s business in the Main Street of Egerton.
​
The couple had two daughters – Ruby Elizabeth born in 1891, and Lillian May, born in 1894. In her early teenage years, Lillian helped her father in his business by making deliveries to customers on horseback.
​
On the same property as the butchers shop was a five room weatherboard cottage that the family resided in. James also owned a 53 acre property known as ‘Murphy’s’ which was situated close to the Gordon railway. It was good grazing land, but also on this land was another weatherboard cottage of four rooms, a 4 stall stable, dairy, cart shed, hay shed, cow shed and pig styes.

​After their children had married and started families of their own, James and Jane retired to Clark’s Hill, which is approximately 23 kilometres from Mount Egerton.  They had purchased a 75 acre farm here and went about selling off their land and assets in Egerton, including the Butcher shop. James was described as a man who has “always taken an active part in anything for the betterment of the town” (Ballarat Star 10 May 1918) and was surely missed in Mount Egerton. 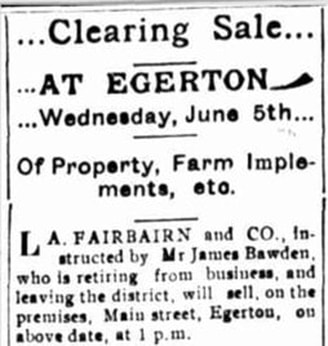 Detail of the advertisement announcing James Bawden's clearance sale in Egerton. Published in the Gordon, Egerton & Ballan Advertiser on 31 May 1918.
James remained a farmer at Clark’s Hill until his death on the 27 March 1939 aged 69.  The funeral was held at the Mount Egerton Cemetery on the following day, performed by Reverend Kent of Creswick.  Jane died just over three months later on July 29; the cause of death was listed as heart failure.  The funeral for Jane was officiated by Mr Mitchell of Morrison’s and Wallace on 31 July 1939.  She is buried at the Mount Egerton Cemetery together with James and his siblings John and their spinster sister Edith who died in 1940. 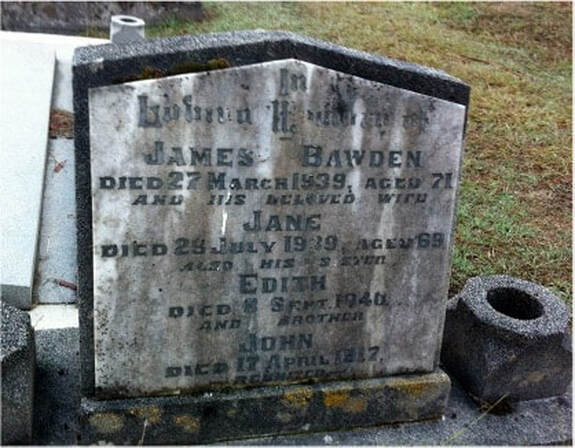